Here on Careerindesign, we love design in all its shapes and forms. However, branding, graphics and communication design is one that is not given enough time in the limelight. For a good chunk of Melbourne’s interior design and architecture studios, their branding is the work of one person, Meet Mike Giesser. We thought it was high time to shine some light on Mike and get an insight into his work, process and the value of communication design. Plus, his client list is long and illustrious  Flack Studio, Foolscap, GOLDEN, Archier, Arts House and Cocoflip to rattle off a few.

How do you work with your clients? Is there a foolproof formula as such?

Mike Giesser: I wish! It’s far from foolproof, but I do have a process that I try to employ as much as possible.

The most crucial stage to get right is the first, it?s always the first. There?s a lot of dialogue, workshopping, untangling and organising. It’s about defining a clients purpose, vision, personality and where they sit among their competitive landscape. The point of it all is simple  to unravel their DNA and hopefully find that one thing that nobody else can deliver. Often it’s less about the ‘what’ they deliver that makes them unique and more about how they deliver that what. This puts the emphasis back onto the people behind the business, which will always be unique.

With the smaller projects, we generally don’t include this stage and instead we move right from brief into the creative. Which, even though we’ve skipped a stage, we tend to spend more time getting things right, simply because the foundations aren’t that solid. There’s a fair bit of ‘you know, it’s kind of a vibe right?’ and then me putting ‘Concept Presentation V.24’ on the cover page. As a result, I find I’m taking on less and less of these projects, simply because I know how they end. 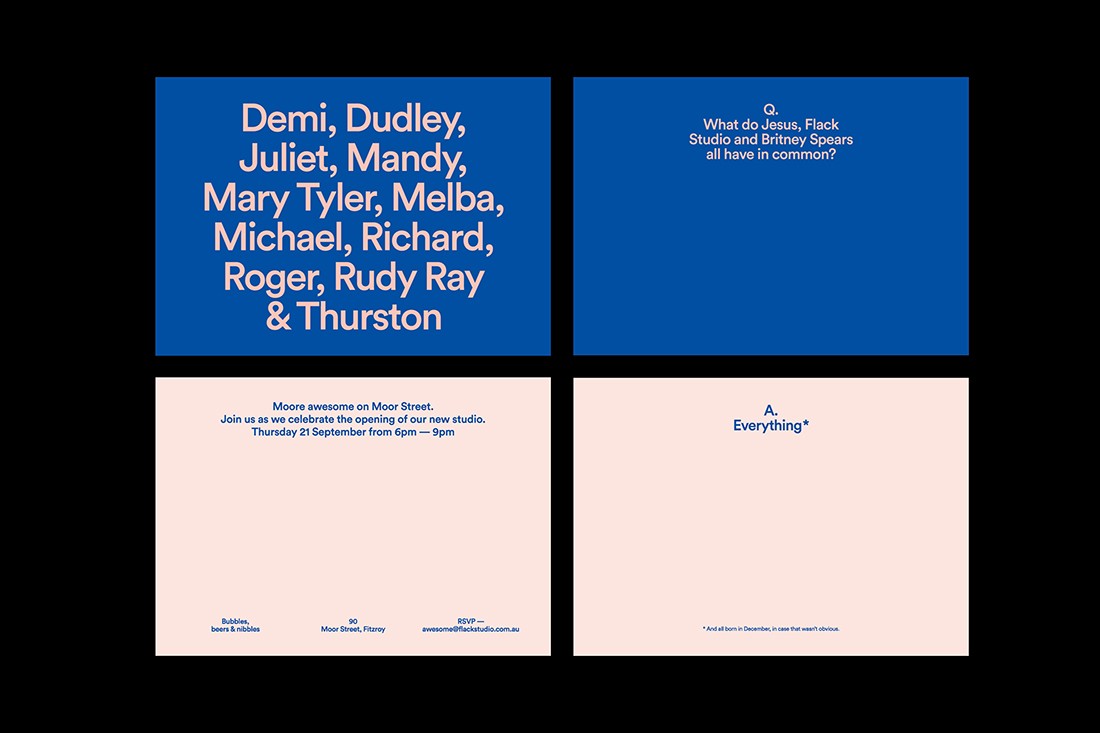 Outside of process, I try and make everything as fun as possible. It’s my nature to crack a lot of gags and try to get a good banter going with my clients. Inevitably there will be stressful times and things don’t always go as planned, so the more collegial our working relationship is, then the better we work as a team. There’s not a client team and a creative team, it’s just one team. The blue team.

The biggest challenge I have is around being a one-man band. You have no choice but to be creative director, design director, senior designer, junior designer, intern, project and production manager. But, it’s still probably easier than mitigating the whole staffing situation and at this stage, I’d rather not sleep than create a studio proper. 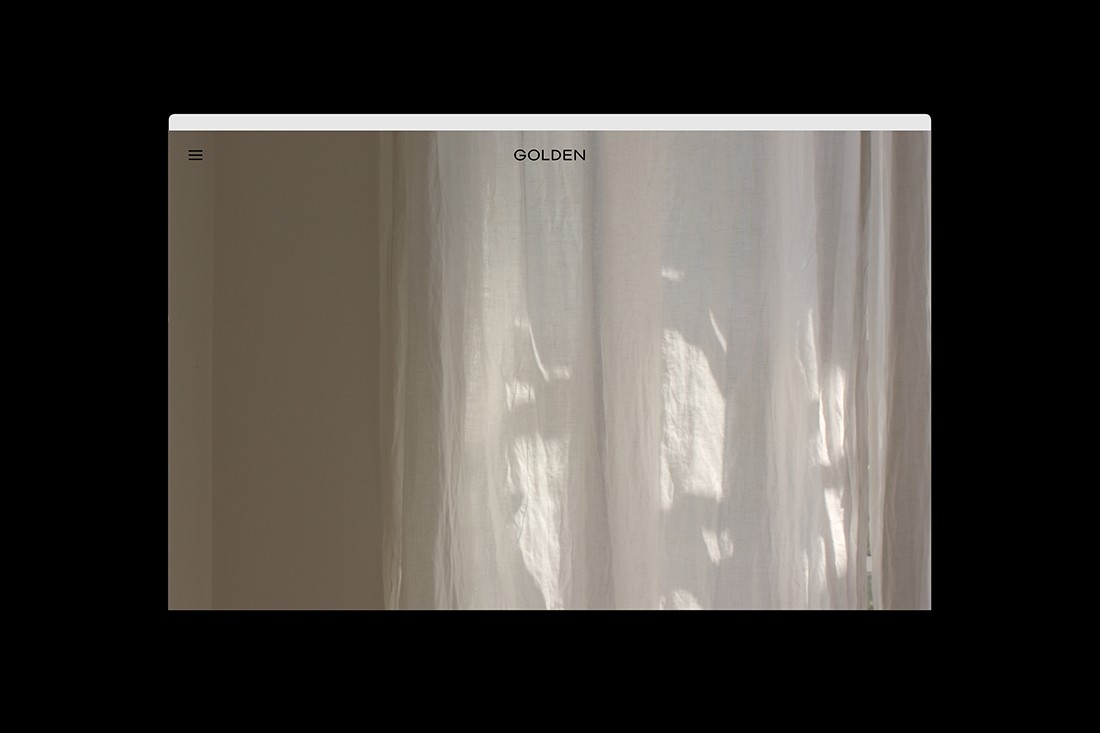 As a communication expert what do you think is the value that branding design can communicate to the wider world?

Ha, I think I’m far from an expert, but in my semi-expert opinion, when you get it right, it’s about communicating a certain, unique truth.

Brand identity should first and foremost take what’s inside a business and bring it out. It has to paint an accurate picture of what the experience will be like when using a company’s product or service. Unfortunately, much of the time I find branding misleading, making unrealistic promises that the business has absolutely no chance of being able to keep.

‘If we want to make something out of this human-centred design idea then we have to embrace what it is that makes us human, and celebrate failure and imperfection as much as success.’

I’d say a lot of it has to do with the fact that there seems to be this belief that we should always be telling positive stories in branding. But positivity simply can’t always be the truth. Nor is it very interesting when it’s all that you encounter. We see this in social media all the time. Grinning, happy, smiling, leaping, people winning at life, but it’s often just a projected façade. Businesses are human, they make mistakes, they don’t always get things right. We as consumers know this, we deal with their shortcomings every day. As creatives, we really need to try harder and find more honest and legitimate stories to tell, myself included. 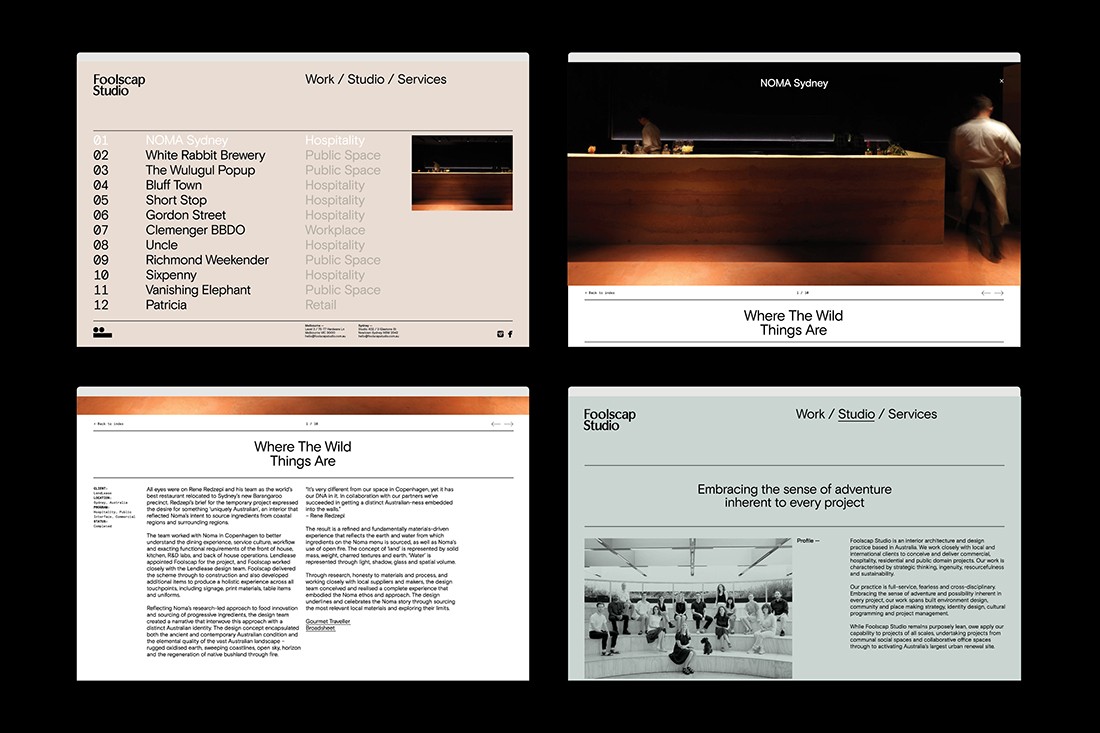 Similarly, it’s time for businesses to realise that they have more to gain  more long-lasting and meaningful relationships with their customers by engendering real trust through being themselves. Warts and all as they say. If we want to make something out of this ‘human-centred design’ idea then we have to embrace what it is that makes us human, and celebrate failure and imperfection as much as success.

‘As creatives, we really need to try harder and find more honest and legitimate stories to tell, myself included.’

In your opinion is a total rebrand a help or a hindrance to an established or semi-established architecture or design practice?

I don’t think it’s necessarily a case of being just one or the other.

If an established practice has a change in its purpose or vision, or if its identity has fallen out of step with the output, then it’s an ideal time to bring these things back inline with each other. In other cases, the value of rebranding an established practice can be about internal satisfaction as much as anything. Reinvigorating the people working there, restoring pride and hopefully alleviating those situations where staff are too embarrassed by their business cards to hand them out after a meeting (this happens.)

Most of my experience is with practices that have had branding done on the cheap by a mate or by themselves and then five or so years later, they’ve become relatively successful but they’re completely unconnected to the identity. So much so, they just stop using it as they believe it’s potentially detrimental when they send out a proposal. In reality, a crappy identity probably won’t prevent you from landing a project if your work is great, but having pride in your brand and even enjoying that painful process of putting a proposal together are worth the investment. It’s no different than leaving the house in a great outfit, when you feel confident and positive about yourself, it radiates. If you’re not feeling it, people can tell. 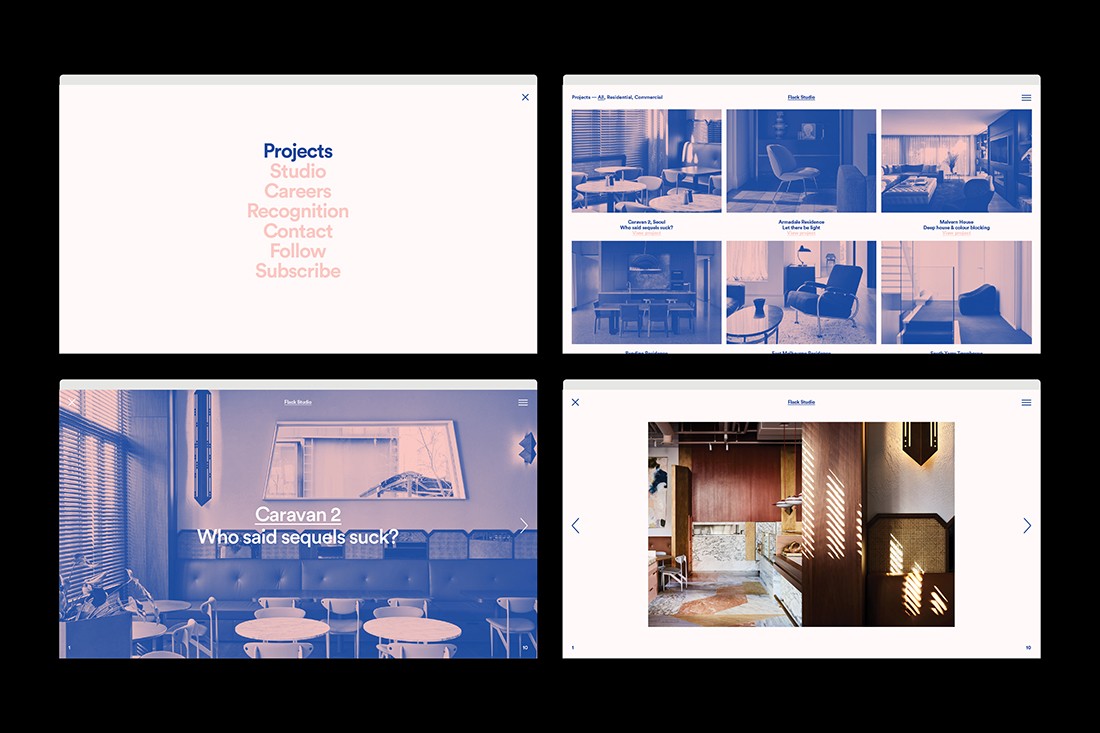 Rebranding also isn’t a guarantee for success and it probably won’t help an ailing business long-term, it might stimulate a spike of interest/activity when relaunched but everything comes down to the actual experience clients are having with the practice, that’s what will affect referral and any repeated business.

I don’t think it should ever really be a hindrance, but I do think designers always need to question what level of rebranding someone needs before completely wiping the whole slate clean.

What do you think makes ‘good design’ in all its disciplines?

Wow? Hmm, yeah, look, my opinion is totally conflicted and contradictory here. Part of me believes good design is invisible. It’s pragmatic and functional. It disappears, enabling the content to be the hero. Good design is honest and it should also be egoless. I think there’s a danger when designers (in any discipline) start seeing themselves as artists or find themselves creating for creation’s sake. I mean, if it’s purely personal work, fine, go for it, but don’t indulge yourself while rocking on your clients’ dime.

The other part of me believes that good design has to make you stop and think, perhaps even make you work a little for it, not giving you all the answers. It should encourage people to not take things at face value and instead to ask better or bigger questions. It should be objective enough for you to make your own informed decision about something, rather than emotionally leading you.

‘Perhaps it’s less about creating and rewarding ‘good design’ and instead, we need to really work towards talking about ‘great design’ or ‘responsible design.’

So much of product design, web design and brand messaging has been centred around making things quicker and easier for us. This is a problem. For too long, design has taken away the need to actually think about what it is we’re doing. It’s enabled society to fundamentally become lazy, promoting an unhealthy and somewhat ignorant lifestyle. Like, how easy is online shopping? The amount of things I’ve bought after a few drinks that just show up at your door two weeks later? It’s like Christmas morning meets Groundhog Day, rinse and repeat. Good design can’t come down to simply selling more things.

I think good design has to take a leadership role and rather than simply responding to current trends, needs and market demands, it should teach us that there are other, better, different ways to do things. If design isn’t an instrument of change, then what is? 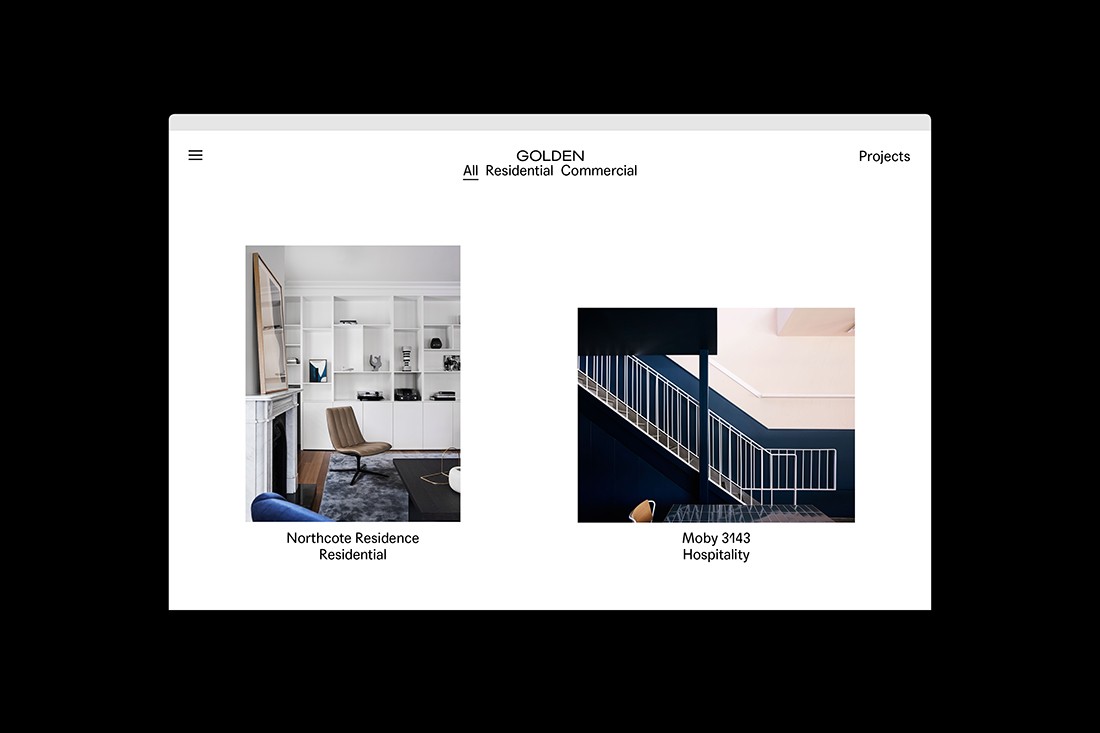 As one more final contradiction, while I’m on a roll, I think good design has to make people smile. Whether it’s a piece of furniture, a pair of shoes, a café, an advert or an animated GIF. Good design can also provide you with a moment to simply enjoy something that’s meaningful to you.

Anyway, perhaps it’s less about creating and rewarding ‘good design’ and instead, we need to really work towards talking about ‘great design’ or ‘responsible design.’

‘If design isn?t an instrument of change, then what is?’

What are your influences or inspirations?

During college, I was very much influenced by studios like The Designers Republic, The Attik and Tomato. Back then questions were less around what the idea was and more around how many layers you had in Photoshop. At the tail end of school and as I started working professionally, I went the opposite way and kind of latched onto the International Typographic (Swiss) Style. Absorbing works from the usual suspects like Josef Müller-Brockmann, Armin Hofmann, Max Bill, Otl Aicher, Emil Ruder, Karl Gerstner, etc. In many ways, this was born out of necessity as much as it was a logical progression. A majority of the briefs I was working on had to be resolved without any budget for imagery so I started using type, words and language in lieu of imagery. This made sense to me as I’d always been more interested in words than pictures anyway. Today this is all still true and probably defines me as a designer. As much as I try and let go of these influences, it’s just in my DNA, I can’t get away from it.

As for more contemporary references, John Morgan Studio and OK?RM are two sources of constant inspiration. 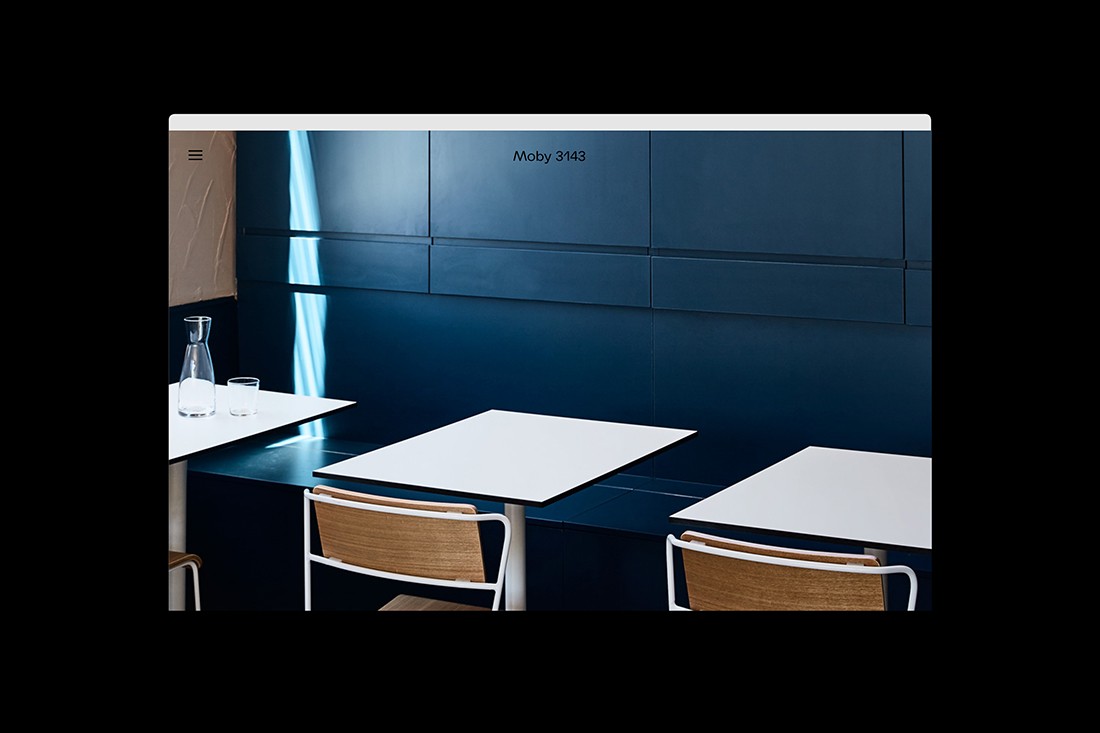 It sounds totally cliché, and it makes me cringe even saying it, but today I find inspiration everywhere. Just real simple things like observing people and existing pieces of design, signage, architecture, advertising, while on the tram or walking around, listening to music, provides me with a wealth of inspiration.

The world is an absolutely absurd place when you really stop to think about it (which I try not to do as much as possible) but I find its absurdity wildly inspirational, at least in terms of what not to do!